skip to main | skip to sidebar

This week I am very pleased to welcome fellow abolitionist advocate Jeffrey Coolwater. You can find Jeffrey on twitter as MacVegan
Here is the link to the blog article we discussed about Jeffrey's 10 "lost years" as a vegetarian, before he discovered veganism and abolition.
Here is a link to the groundbreaking interview that we mention of Professor Gary L. Francioneon Vegan Freak Radio
You can find all the audio interviews of Professor Francione on the Audio Page of the Abolitionist Approach website
Please read Gary Francione's books! (5 of which are available at the Auckland Library)
Here is a link to the book Jeffrey mentioned by Bob and Jenna Torres: Vegan Freak: Being Vegan in a Non-Vegan World (Also available at the Auckland Library)
This is the cartoon I talked about in the podcast. (HEE HEE!! I just love it!)
~ Credit for this hilarious cartoon goes to Ignatz Ziller. 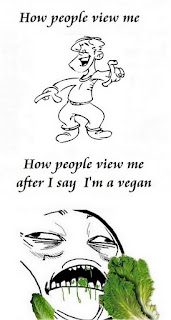 Thanks so much Jeffrey for coming on the show!
Publicado por Elizabeth Collins en 5:40 PM 2 comments:

NZ Vegan Podcast Episode 91 - Either not existing or exploiting someone - these are not valid options!

This week I talk about something that was inspired through a conversation from the last street stall we did and also by a lot of things going on lately and in fact by all the things I have learned over the last 4 years since I went vegan.
Here is the link to the latest Foxconn Protest
Here is the link to the podcast episode I mentioned from This American Life
Here is the link to the story I talked about from the Horn of Africa (note - ignore the bit about the "cattle" and please investigate the other related stories on there such as This One and This One)
Here is a link to a petition against the NZ Food Bill, and here is the link to the Food Bill itself, and THIS is an interesting article that someone kindly sent to me about it.
Here is the link to the Vegan Pensieve article I mentioned about eggs - Warning - disturbing photos
And finally, Please Read Gary Francione's Books. The book I mention in the podcast that I quote from is Animals, Property and the Law.Publish Post
Thanks for listening
Publicado por Elizabeth Collins en 12:58 AM 7 comments:

This week I revisit something that is old news but I think still very relevant for the coming year and all years of the vegan movement, which is that we have no excuse for not promoting veganism unequivocally.

I mention a discussion where things "clicked" for me and I always recommend to all advocates to listen to this discussion between Gary Francione and Erik Marcus: listen here or access it on the Abolitionist Approach audio page (scroll down to find the interview)
I mention this article by Corey Wrenn: Academic Discrimination Against Vegans
Here is Randy Sandberg's fantastic Quotes on Slavery website where you can find a lot of history about the history of the Abolitionist Movement against slavery in the human context which can teach us a lot about the movement today to abolish all slavery, human and nonhuman.
I mention that Peaceful Prairie Sanctuary residents need hay for the winter, but anyway they always need help and also I have links to some local sanctuaries and other rescue groups in NZ - please if you are going to donate money to anyone please donate directly to helping animals such as sanctuary, adoption and rescue, rather than to welfare campaigns and organisations.
Here is a message of nonviolence for 2012 from Trish Roberts of Lobsa and LiveVegan: A Message of Nonviolence for 2012
Here's a great new article just released by Dan Cudahy and Angel Flinn for the New Year: Make the Vegan Resolution
Here is a great new article by Vincent Guihan: Vegan Outreach: how not to do it
Happy New Year everyone! :)
UPDATE: I just want to add that this particular rant of mine was not a commentary on vegans who are unequivocal vegans in their own lives, and live vegan uncompromisingly, yet don't advocate it as such as an extra activity outside of normal life as vegans, because they are just not really interested in actually being an 'activist" as it were or they are advocating other social justice issues that take up all their free time, however they live vegan; it was specifically due to experiences with vegans who are welfare advocates, with whom I was discussing activism, and their preference of promoting welfare reform, their resistance to promoting veganism at all, and their absolute refusal to do it unequivocally.
I recognise that these vegans and all vegans are challenging the status quo by being vegan, and are to an extent being advocates with regard to the example they set to those around them. I am glad for all vegans for being vegan. So I want that to be really clear. This is specifically in regard to the above-described position of welfare advocates.

What this NZ Vegan Eats

All the photos print out nicely

Now everyone can make them - I will be making books of all the presentations - go to the video page at abolitionistapproach.com and download the pdfs. Thanks Randy!

Tabling. I carry this on the bus, it's very compact and portable!! I might start taking it to parties LOL

Up close and personal

Can't wait till that wall comes down