skip to main | skip to sidebar

NZ Vegan Podcast Episode 28 - Part two of my interview with Dr. Roger Yates - continuing our talk on why we need more vegans!

Talking about sincere animal rights and vegan activism and believing in the message. Please contact your local soymilk supplier and ASK THEM WHAT THEY FILTER THE SOYBEANS THROUGH - i.e do they use silk? We are trying to find out, and if they do, we want everyone to write and make a case so they will stop doing that. In the meantime Sarah has a great recipe for homemade soy milk at The Vegan Mentor see Making Soy Milk

We also talk about Animal Rights July which I would love to replicate at a university here in Auckland. Check it out! It looks good. See the link at Roger's blog On Human-Nonhuman Relations

I hope you enjoy the interview as much as I did! Thank you Dr. Yates!
Publicado por Elizabeth Collins en 9:45 PM 6 comments:

In part one of this interview we talk about Dr. Yates early involvement in the beginnings of the animal rights movement in Britain and the changes he has noticed since then till now, his writings and studies as a sociologist with regard to human behaviour, community activism and grass roots movements, and why we need more vegans! I hope you enjoy the interview! Stay tuned for part two.
Publicado por Elizabeth Collins en 7:16 PM No comments:

This week I talk about some great local activism done by Sam, a NZ Vegan who is 13 years old, who blew me away with his new website, the first real website from New Zealand that gets to the truth of what dairy products really are, using a New Zealand perspective which is so important in our culture, and spreading the word about veganism in a very effective way!
NZ Dairy Cruelty
Thanks Sam! I am very grateful, I can now recommend this site to local people to show them the truth right from their own backyard, and it is a fantastic resource for us who are spreading the word about this cause and to educate people about veganism.
This week I talk a lot about my country as I am trying to bring the vegan abolition message to more people here, and I am looking forward to doing some grass roots activism with my abolitionist colleagues, and I am hoping to be prepared for anything, but I know we will learn as we go along.
I hope to have more guests on the show soon!
Publicado por Elizabeth Collins en 12:58 AM 7 comments:

NZ Vegan Podcast Ep. 25 - Abolition in NZ cont'd-my reaction to the factory pigs welfare campaign +My intepretation of the concept animals are persons

Today I make an announcement, and also finally respond to the hugely publicised campaign by the NZ animal welfare group S.A.F.E to promote "free range" pork consumption. I must admit I really let the side down. I wallowed in a level of self indulgment that is really inexcusable, especially from someone such as myself who claims to be such an activist. I apologise. I didn't write any letters to the papers or participate in any discussions, because I allowed myself to be negative. Well, now I finally made a comment on an animal welfare page (not a local one), maybe it was the wrong place to do it -maybe all the people who read that blog are vegan, I don't know. Here is the article if you want to comment also:
Animal Welfare Examiner

That is the comment I should have left on every NZ paper opinion page and every discussion board across the country while everything was going on, and I didn't. I admit I let everyone down especially all of the poor suffering pigs. The story is still out there though, so I will now be participating - better late than never.
I want to thank all of you who did respond on these opinion boards and to the papers and talk about veganism. For example Bea Elliot wrote in, and she lives in America, where they have so many detrimental welfare campaigns of their own to deal with, and I live here and I didn't write anything, so I am put to shame. No excuses, I let the side down. However, I have addressed the issue in this episode and I welcome comments. I am not trying to turn this podcast into a rant, or into a negative website dedicated to criticising S.A.F.E - in fact I hope to not mention them again - they do what they do, I do what I do. However, it was so highly publicised, and I was so disturbed by it that I needed to get it off my chest, and now I feel so much better. This is really a good way to resolve inner conflict - I recommend starting a blog or podcast! It is worth it. Also, as I told someone recently, we can't let the others do all the work for us. Grass roots means community level, and that is what we need, in all languages, by actual members of those communities in their own words. And that is what grass roots activism is all about. Also, in light of campaigns such as this one, we need it more than ever, so that is what I hope to do in New Zealand. Also, I would like to acknowledge another abolitionist vegan in New Zealand! I hope I am not incorrect in pinning this description on you Bron - but I think you get it! Thanks for keeping in touch, and I am sorry I didn't include you in the tally. Now we are FOUR!
Finally, coincidentally as I was uploading this post, I checked my email and there was a new update from the Abolitionist Approach about an article in which Gary Francione mentions the importance of seeing animals as individuals - this is how I understand it to be when they are described as persons. So I thought it was a good coincidence.
UPDATE: check the comments section of this post to see input from Roger Yates where he also mentions Professor Francione's book Animals As Persons and some quotes to explain some of the concepts as presented in the book.

P.S I am aware that Anthony De Mello passed away many years ago, so although I did talk about him and his writings in the present tense I do know he is no longer alive.

P.P.S The following is the passage I referred to in this episode. Mr. De Mello was primarily concerned with the human condition, was a Jesuit Priest, and was not a vegan, but even as a non-religious vegan I find his writings very helpful. It appears the Krishnamurti is the originator of the quote.

"...The great Krishnamurti put it so well when he said, "the day you teach a child the name of the bird, the child will never see that bird again". How true! The first time the child sees that fluffy (sic), alive, moving object (sic) and you say to him, "Sparrow", then tomorrow when the child sees another fluffy, moving object similar to it he says, "Oh, sparrows. I've seen sparrows. I'm bored by sparrows".

If you don't look at things through your concepts, you'll never be bored. Every single thing is unique. Every sparrow is unlike every other sparrow despite the similarities. It's a great help to have similarities, so we can abstract, so that we can have a concept. It's a great help, from the point of view of communication, education, science. But it's also very misleading and a great hindrance to seeing this concrete individual..." - Awareness, Anthony De Mello
Publicado por Elizabeth Collins en 2:17 PM 15 comments:

I am trying to bring the abolitionist movement down here to New Zealand where it doesn't exist at all, and to do that I need to get out in the community and work on my people skills and gear them towards the culture I live in, while at the same time trying to circumvent the wasteful tangents they get led down by the expensive, publicized and highly promoted welfare campaigns that are getting people all hung up on the size of cages and whatnot, as opposed to talking about the real issue. The REAL ISSUE!!!!! It has been a very frustrating couple of weeks down here in New Zealand for anyone who cares about animals and who is trying to open peoples minds up to abolishing animal use and going vegan, rather than patting themselves on the back about how they can be morally superior by going down to their butcher and demanding "happy" meat. If people care enough to be bothered about the treatment of the exploited animals at all, then they care enough to GO VEGAN and end the exploitation, or at the very least they certainly deserve to be talked to directly and honestly about that option. And that is what everyone who wants to help non-human animals should be talking about with people who are expressing any interest at all in the "horrible treatment" or the "welfare" of animals. It is truly a magically uncomplicated solution, it is astonishingly simple and we need to stop confusing the issue. Meanwhile I need to figure out how to talk to people who haven't even begun to think about the issue, and steer them away from thinking about anything but the truth of the matter. It's a never ending process of theory and practise, but how to do it with people who just flat out ignore the entire deal, especially when you are sitting amongst them while they are eating dinner, and all you are thinking and feeling is how can I get the message through? At the very least how I can get them to understand why I am so not enjoying sharing this dinner with them, because of the anguish I am truly feeling for the animals they are eating and feeding to their children? That is quite a tough one for me, I am still figuring that out, but that won't take time away from my jumping on any opportunity I do get to spread the knowledge of this astonishingly simple concept
Publicado por Elizabeth Collins en 3:45 AM 1 comment: 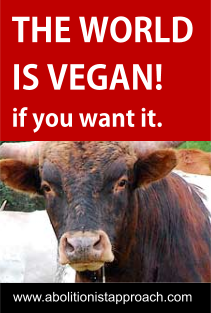 What this NZ Vegan Eats

All the photos print out nicely

Now everyone can make them - I will be making books of all the presentations - go to the video page at abolitionistapproach.com and download the pdfs. Thanks Randy!

Tabling. I carry this on the bus, it's very compact and portable!! I might start taking it to parties LOL

Up close and personal

Can't wait till that wall comes down